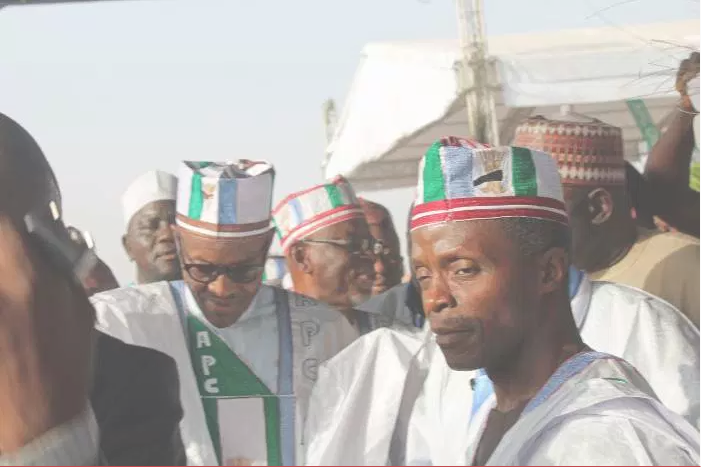 Nigeria’s Minister of Communication Technology, Adebayo Shittu, has announced a campaign organisation for the re-election of President Muhammadu Buhari and Vice President Yemi Osinbajo in 2019.

The minister also on Wednesday briefed President Muhammadu Buhari about the campaign organisation.

Mr. Shittu, who spoke with State House correspondents after the meeting with the president, said the campaign team will be called the “Muhammadu Buhari/Osinbajo Dynamic Support Group.”

“I informed Mr. President that I have appointed national chairman of the Board of Trustees of Muhammadu Buhari/Osinbajo Dynamic Support Group and on 20th of this month we are commissioning the South-west zonal office of the campaign organisation of Buhari/Osinbajo.”

Although Mr. Buhari has not declared his intention to seek re-election, the minister gave no indication that the president opposed his call for early re-election campaigns. Instead, he said, the president’s ardent supporters would prevail on him to run again.

“I know he has not made up his mind but I can say that some of us can assist him in making up his mind so that Nigeria can continue to enjoy stability and progress in our land,” Mr. Shittu, who is also vying to be Oyo State governor, said.

He said there was no need to ask if the president would recontest because he has done well in providing relief to Nigerians in all aspects.

“It goes without saying. I mean, if you have a child who goes to primary school and does well, proceeds to secondary school does well, and you keep asking is he going to university?

“By the grace of God, we his ardent supporters who appreciate his worth on behalf of millions of Nigerians would urge him to re-contest,” the minister added.

Mr. Buhari himself recently hinted he may seek re-election.

The president gave the first clear hint on this last year in Abidjan, Cote d’Ivoire where he attended the 5th European Union-African Union (EU-AU) Summit.

After arriving late to an interactive session with the Nigerian community in Cote d’Ivoire, Mr. Buhari said he had to wait for two governors to accompany him to the meeting because of their electoral value.

“First, I want to apologise for keeping you for too long sitting, this is because I insisted on the governors attending this meeting,” he said.

“This is why I came along with them so that when we are going to meet you, when you are going to meet the rest of Nigerians, if you tell them that their governors were in the company of the president, I think that will be another vote for me in the future. I’m very pleased that they were able to turn up.”

One week after the Abidjan visit, the president gave another hint when he visited Kano and said with respect to elections, “people of Kano are in my pocket.

The Kano trip appears to show that despite the economic and security challenges faced by Nigerians, Mr. Buhari’s popularity, especially in the northern part of the country, remains high.

In terms of opposition, Mr. Buhari is expected to have a smooth ride in clinching the presidential ticket of his party, APC, in 2019. An expected challenger, ex-Vice President Atiku Abubakar, already left the ruling party to the opposition PDP.

Should Mr. Abubakar clinch the PDP presidential ticket, he would be Mr. Buhari’s major opponent in 2019.

The PDP, which governed Nigeria for 16 years (1999-2016) faced over one year of crisis due to leadership tussle between erstwhile caretaker chairman, Ahmed Makarfi, and ousted chairman, Ali Modu-Sheriff.

The Supreme Court eventually ruled in favour of Mr. Makarfi, thus bringing some peace to the party.

The party in December 2017 held its national convention to produce a new leadership headed by Uche Secondus as national chairman.